"We're surrounded - that simplifies our problem!" 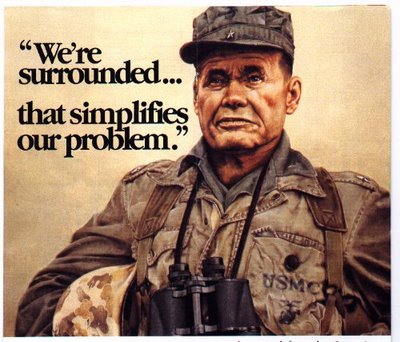 When an Army Captain asked him for the direction of the line of retreat, Col Puller called his Tank Commander, gave them the Army position, and ordered: "If they start to pull back from that line, even one foot, I want you to open fire on them." Turning to the Captain, he replied "Does that answer your question? We're here to fight."

- Chesty Puller At Koto-ri in Korea

Lewis Burwell Puller, a native of West Point, Virginia, enlisted in the Marine Corps in 1917, shortly after completing his "rat year" at the Virginia Military Institute. Yearning to join the fight in Europe, he left his VMI classmates behind and attended Marine Corps recruit training, hoping to join the fight against the Germans. Unfortunately, he never saw combat during the world war and was placed on the Marine Corps inactive list due to post war drawdowns. Unsatisfied with civilian life, he re-enlisted in the Corps and got his first taste of combat in Haiti. It was the begining of a long line of military campaigns in which he'd participate. By the end of his 37 year career, Lt. General Lewis "Chesty" Puller had earned 14 personal decorations, to include five Navy Crosses, the Distinguished Service Cross, the Silver Star, two Legions of Merit with "V" device, the Bronze Star with "V" device, the Air Medal and the Purple Heart.

"Chesty" Puller became more than a hero; he was an American legend. His gruff, give 'em hell attitude was admired throughout the Marine Corps. His bravery and his nickname were known to millions of Americans on the home front. He was a man's man, a Marine' s Marine. For all his renown, however, there are few permanent monuments to "Chesty" Puller. One of the few is in the Hall of Valor at the VMI Museum. There, thousands of visitors come each year to learn about the VMI men who've made our nation great. "Chesty" Puller's medals are on display along with those of other famous VMI graduates, to include Admiral Richard E. Byrd, General Lemuel C. Shepherd, and others. Even some students who didn't graduate, such as General George Patton, lamented on VMI until the day they died. (paragraph courtesy of http://www.polaris.net/~jrube/chestpul.htm)

On June 29th, I was honored to assist the Marine Corps Museum with the retrieval of several dozen personal items belonging to LtGen. Puller. The items, located at the Marine Barracks at Naval Weapons Station, Yorktown, VA, included a complete set of the General's personal decorations, his original promotion warrants, an engraved Mameluke sword, a satin Lieutenant General's flag, and other items loaned to the Barracks in the mid 1970's by Mrs. Virginia Evans Puller, Chesty's widow. Displayed in "Puller Hall," the items have been remained in Yorktown for thirty years. 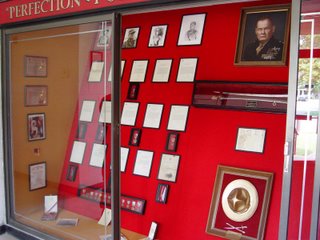 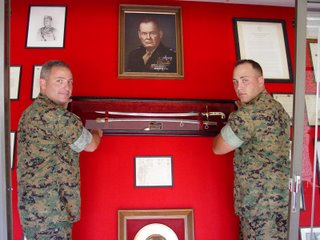 Sadly, the items had suffered the harmful effects of heat and sun damage while displayed at Puller Hall. Decoration ribbons had faded, as had photographs and flags that had become sun-baked behind the glass display case. Though beautifully displayed, the items were in need of restorative care, which will certainly occur once returned to the Museum. Assisted by the Marine Corps Security Force Supply Sgt., I carefully removed each item from the display case and packaged them in boxes, checking the items against the curator's list. Satisfied I had retrieved everything, I nervously departed the Weapons station with a priceless collection of artifacts in the back seat of my POV. As a fellow Marine and VMI alumnus, I 'm sure the General would have been satisfied to know I had been entrusted to care for his belongings, if only for 24 hours. 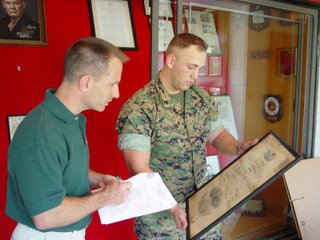 Of all the items, my favorite artifact was Chesty's engraved mameluke sword, presented to the General in recognition of his valor in Haiti, where he'd served as an enlisted Marine with the Gendarmerie d'Haiti, a military force operating in Haiti under a treaty with the United States. Most of its officers were U. S. Marines, while its enlisted personnel were Haitians. Spending almost five years in Haiti, he saw frequent action against the Caco rebels before returning the the United States in 1924, where he was immediately commissioned a Marine second lieutenant. The sword was in beautiful condition, a truly significant piece among the Puller estate items.

For those who weren't aware, the mameluke sword was originally adopted for wear by Marine Corps Officers after it was presented to Lieutenant Presley Neville O'Bannon, who led seven Marines and an odd assortment of mercenaries and cut-throats in a bayonet charge against a Tripoli fort on April 27, 1805, securing the surrender of Jessup, the bey of Tripoli. Hamet Karamanli promptly took as ruler of Tripoli and presented O'Bannon with his personal jeweled sword, the same type used by his Mameluke tribesmen. Today, Marine officers still carry this type of sword, commemorating the Corps' service during the Tripolitian War, 1801 - 05. Appropriately, the actions of O'Bannon and his small group of Marines are commemorated in the second line of the Marines' Hymn with the words, "To the Shores of Tripoli".

Arriving safely at the Marine Corps Museum, I gently unpacked and inventoried the items with Ms. Jennifer Castro, the museum curator and caretaker for the incredible assortment of artifacts held in the museum archives. In addition to her curator responsibilities, Jennifer is heavily engaged with the Marine Corps Heritage Foundation's National Museum of the Marine Corps, which will open on the 231st birthday of the Corps on Nov. 11, 2006 - you may have seen it while driving on interstate 95 near Quantico and Dumfries. It will soon display historic memorabilia of Marines past and present, which may one day include the documents, flags, decorations and sword belonging to the General we know simply as "Chesty." 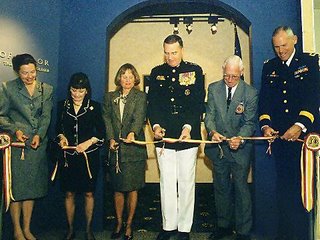 Welcome back to blogging!

Well, that was a long dry spell without hearing from you!

I read Marine! in April and so really enjoyed this post. I'm going to link to it it, seems like I link to a lot of your stuff. It must all be good!!!

Thank for taking such good care of the Corp's precious history. I'm sorry to hear that "Chesty's" collection will not be part of the initial display in the new museum. I'd really like to see it.

I am in a play that closes tonight called "A Few Good Men". In this play, the bad guy is a Col. Jessup. I just found out why that is his name. At Tripoli, the leader of the fort taken by the marines, is also named Jessup.

I just found your site, and I am thrilled. I can't wait to read more. I am a Woman Marine from the Viet Nam era. Both of my husbands were Marines, as is my Mother-in Law, son, and brother. This family has some stories to tell also. Maybe I will follow your lead and blog them also. Semper Fi.

Thank you for the beautiful post shared with us. It is informative and interesting. Keep sharing thank you
Digital Marketing Hyderabad