The famous French Emperor and General Napolean Bonaparte once declared "A soldier will fight long and hard for a bit of colored ribbon." A European tradition usually reserved for royalty, the wearing of medals was uncommon among US Military pesonnel until the late 19th century, when civil war soldiers were awarded unofficial badges by local commanders, a practice later formalized by the services as a means to recognize the bravery and accomplishments of a military service member.

Having fallen out of favor since the civil war, the practice of beestowing unofficial awards upon deserving Marines has never completely disappeared. An number of unoffical decorations have been awarded to Marines over the last century, signifying a shared experience or common bond that will never be formally recognized by our Corps. Despite their unofficial status, however, these awards are often more coveted than all others combined.

One such example is the George Medal. Legendary among 1st Marine Division veterans of Guadalcanal, only about 50 were cast in Australia before the mold gave out. According to retired Marine Col. Brooke Nihart, a Navy Cross recipient and historian who recently passed away in August, 2006, the George medal commemorated the difficult situation of the division during the early days on Guadalcanal, when ammunition, food, and heavy equipment were short and the Japanese plentiful. The Marines faced increasing Japanese air attacks and surface action which left the division in a tight spot.

In the recollection of then-Captain Donald L. Dickson, adjutant of the 5th Marines, the Division G-3, then-Lieutenant Colonel Merrill B. Twining, resolved to commemorate the occasion. Twining told Captain Dickson, an aspiring artist, what he had in mind. Captain Dickson went to work designing an appropriate medal using a fifty-cent piece to draw a circle on a captured Japanese blank military postcard. 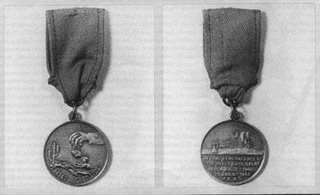 When the division departed Gudalcanal and finally reached Australia, a mold was made by a local metal craftsman and a small number were cast before the mold became unserviceable. Those wanting a medal paid one Australian pound for it and received a certificate as well. The medals are now an even greater rarity than at the time. In recent years, reproductions have been cast, and can be identified by the different metal and a poor definition of details.

The obverse design of the medal shows a hand and sleeve dropping a hot potato in the shape of Guadalcanal into the arms of a grateful Marine. In the original design, the sleeve bore the stripes of a vice admiral, intended to be either Vice Admiral Robert L. Ghormley, ComSoPac, or Vice Admiral Frank Jack Fletcher, Commander Joint Expeditionary Force, but the final medal diplomatically omitted this identification.


Also on the obverse is a saguaro cactus, indigenous to Arizona, not Guadalcanal, but representing the code name for the island, "Cactus." The obverse inscription if Facia Georgius, "Let George Do It." Thus it became known as the George Medal. The medal's reverse is inscribed: "In fond remembrance of the happy days spent from Aug. 7th 1942 to Jan. 5th 1943. U.S.M.C."

Much like Lieutenant Colonel Twining, US Marine Corps Major Joe Winslow hoped to commemorate his wartime experience. However, Major Winslow's would occur nearly 60 years later in 2004, far away from the island of Guadalcanal. Instead of water and jungle, he was surrounded by sand, and the enemy were not Japanese. They were insurgents and were battling Marines of I MEF (Fwd) on the streets of Fallujah.

As the MEF slowly pushed through the city, then-Captain Winslow recalled the unique, historical significance of the George Medal and was inspired to create a similar award for his fellow Marines who'd already served or would soon serve in the billet of Field Historian during Operation Iraqi Freedom. A unique, independent position carried out by only one or two Marines at a time, the Field Historians traveled throughout the theater, recording the oral histories of Marines engaged in combat operations and combat service support, while simultaneously collecting documents and artifacts for archiving at the Gray Research Center and the National
Museum of the Marine Corps in Quantico.

Captain Winslow hand sculpted his concept in plaster, pouring a firing mold from concrete and other materials found at the MEF headquarters. The medals' design was based upon an Iraqi army badge, with a Marine Corps eagle, globe and anchor super-imposed on a Persian star, surrounded by palm fronds. The colors of the suspending ribbon are scarlet, black and silver, which respectively represent the blood of Marines shed in OIF, the lives given in support of their fellow Marines, and the Field Historian's fidelity to history. Captain Winslow's first prototype was cast in Fallujah using silver sent from a texas silversmith. The remaining
versions were later cast at home by a Marine Corps Guadalcanal veteran.

Like the George Medal, the Military Order of St. Nicolas will be shared by a finite group of people for a limited period of time. Worn only at events or gathering attended by members and of the Field History detachment, the Military Order of St. Nicolas will forever serve as a reminder of time spent in the Al Anbar Province of Iraq, watching and recording history in the making. 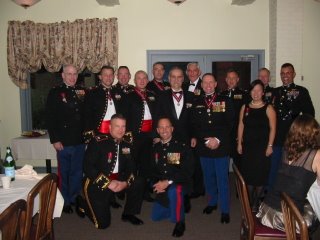 The George Medal Information was obtained directly from a US Marine Corps Historical Division WWII Publication on Guadalcanal.
Posted by VMICraig at 2/01/2007 10:44:00 PM 6 comments: