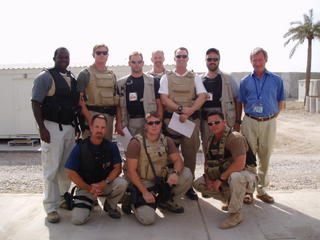 With only two days left in Iraq, my time at the CPA draws to a close. Yet despite my desire to return home to family and friends, I must admit that I feel somewhat melancholy about leaving Iraq and the people I've served with on this detail. During the short time we have spent here, I have experienced things that most people will never have the opportunity to see or do. I've dined on mutton and curry at the village hut of an Iraqi tribal chief, constructed of reeds and thatch. I've wandered the halls of the Presidential Palace in Baghdad and stood in front of the great crossed swords of Saddam's Victory Stadium. I've driven through the cities of Al Kut, As Samawa, An Nasiriyah, Al Amara and Al Basra, and seen the beautiful mosques and souks, or markets, that thrive in these cities. I've met military and civilian coalition members from Denmark, Great Britain, Italy, Holland, Wales, Ireland, and Japan. Each of these events have rewarded me in an intangible way that cannot be explained without experiencing it for yourself.

Certainly, there are many things I am glad to leave behind. Mortar attacks and nighttime explosions top the list, as do roadside IED's, car bombs, and the constant threat of attack against coalition personnel. The need to travel in armored vehicles, wearing 45 lbs of body armor and ammunition gets old very quickly. The inability to stop your car and walk around town without being injured of killed is a very strong factor influencing our desire to go home for awhile.

Yet, I leave Iraq having also seen many positive changes occur since my arrival. New businesses are opening and many Iraqi's are learning the value of capitalism. The infrastructure of the city is improving daily, with new water and sewage plants, electrical stations, and schools. Sanitation workers are slowly removing twelve years worth of garbage from neighborhoods affected by the decade-long embargo against Iraq. Children are returning to school and roadways are being repaired after years of neglect. Despite the negative portrayal of events by our media, a greater percentage of positive things are occurring daily in the cities and countryside than what one is led to believe. The media routinely reports negative events and rarely portrays the accomplishments taking place in Iraq on a daily basis.

Conversely, I have also seen a stalemate in the progress of security for the Iraqi people and the promise of self-government which is truly independent of Western rule. The prospective Iraqi election and dissolution of the coalition appears less likely to happen by July 1st than it did 60, or even 30, days ago. Coalition troops continue to battle extremists in the cities of Fallujah, Najaf, and Amara. Politicians continue to argue the future of Iraq, the makeup of it's government, and the role of religion in the future of this country. In my opinion, coalition leaders do not fully understand the influence of Islam and the stark difference between the western and Arab cultures. The western ways of conducting business and our handling of inter-personal relationships differ from that of the Arabs as much as it did for the early pioneers and Native Americans in the 19th century. Until the Iraqi's can govern themselves and provide security for their own people, U.S. servicemembers and other coalition forces will continue to be looked upon as an occupying force by the Arab world.

My tour in Iraq has spanned the spectrum of human emotions. Whereas I have felt mostly at ease throughout this tour, I have also experienced moments of intense fear and helplessness, greater than I could ever imagine. One quickly come to terms with their own mortality when nearby rocket or mortar explosions jar them awake at night.

Much like the aftermath of the 9/11 tragedy, my time spent in Iraq has left me with an renewed sense of patriotism for my country and my flag. More personally, I come away from this experience with a greater appreciation for my wife, my family, and my friends. We are truly blessed to be Americans and to have family and friends whom we can turn to it time of need. I wish nothing less than success to the members of the coalition as it continues it's progress in Iraq. My time here, however, has ended. It has been a fascinating trip.
Posted by VMICraig at 5/05/2004 12:46:00 PM 1 comment: 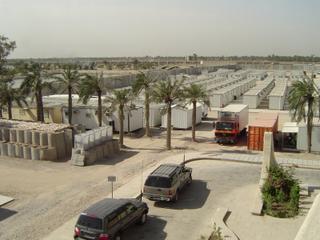 Living and working within a British compound has been a very interesting experience. Although we share a common language and heritage, the British ways of conducting business are far different than that practiced by most of the Americans living within the CPA. It seems the more we try to understand each other, the less we find we have in common.

Take the Ambassador’s security manager, for instance. The security manager is responsible for developing and implementing a security plan for the CPA, which includes the construction of bomb shelters, the placement of barrier walls and sandbags throughout the CPA, and the refinement of perimeter security around the compound. Completely understandable duties considering the environment within which we work. However, in the British mind, those mundane tasks are secondary in nature. Our security manager focuses his efforts on more important, self-appointed duties, and I quote his recent remarks....

1. Chow Hall Monitor – please do not take food nor drink from the dining facility
2. Bathroom Cop - please maintain a tidy appearance in the loo, as women also enjoy the use of these facilities
3. Laundry Police – Your laundry may not be hung from lines beside your lodging, for it may attract flies or other vermin. Please keep all laundry within your quarters.

More frustrating, however, is the overwhelming attitude amongst the British civilian and military staffs that everything should be handled in a politically sensitive nature, as not to offend our Arab hosts (yes, the British do refer to the Iraqi’s as our hosts, although I have yet to be offered a beer or cocktail weenie). For instance, my team had the opportunity to obtain a trained bomb dog for use during the Ambassador’s tenure at the CPA. A bomb dog would have been extremely helpful when checking our vehicles for improvised explosive devices (IED’s) or to ensure explosives aren’t hidden at the various locations to which we escort the Ambassador. However, the British staffers advised us that “Arabs do not like dogs and believe they are filthy creatures. Hence, their presence might risk offending our hosts, and we shall not cause such issue.”

A favorite term of our British counterparts is “celebratory fireworks.” Occasionally, the sound of automatic gunfire will interrupt our sleep. Yet, ask a member of the British staff what occurred the next morning and you will invariably get the response, “probably just celebratory fireworks”. It seems the British have a deep-rooted fear of admitting that bullets are actually being fired at the CPA at 2:00 a.m., or that some of the local populace really doesn’t want us around. Perhaps the 8 mortar rounds launched against our compound over the last 2 evenings were actually kids playing with firecrackers. Extremely large, loud and powerful firecrackers, but firecrackers nonetheless.

The Brits also seem afraid to stand their ground and face adversity, much like British actor Hugh Grant has done in all of the chick-flick movies he has starred. Last week, approximately 1000 followers of the radical Iraqi Shiite leader Muqtada Al-Sadr swarmed the city of Basra and seized the governor’s building in the center of town. This action followed a day of battles between the militia and U.S. led forces elsewhere in Iraq, in which officials said ten U.S. troops and almost 100 Iraqi’s were killed. The Sadr supporters were demanding the release of a Sadr aide arrested by U.S. forces and the lifting of a U.S. ban placed on Sadr’s newspaper. Still, nearly a week after its seizure, the Basra governate remains in the hands of the Sadr militants. The group has sent word that they will leave the governor’s building when the coalition departs Basra. The surprising part is the British are openly permitting the situation to remain this way. Rumor has it that Brit leadership has entered into negotiations with local clerics and allegedly agreed to lobby for the reduction or removal of coalition forces from Basra if order is restored to the governate. The truth and extent of this rumor remain to be seen.

Despite our similar jobs, even the British protection teams enjoy a different outlook from the one I share with my teammates. As a member of the Ambassador’s close protection team, I wear body armor. I also carry a pistol, a carbine, and 300 rounds of ammunition conspicuously exposed when I am in public. In the team’s opinion, deterrence is our best protection! Deterrence works wonders. Yet, we are labeled “cowboys” by the private security contractors (British) who share similar duties at the CPA. Their rules forbid them to expose weapons or carry their rifles outside of their vehicles. In fact, in an attempt to poke fun at our American methods of operation, the British Communications Office changed our radio call-sign. Previously, all security units in Basra were referred to as Golf 1, Golf 2, Golf 3, etc. In a weak attempt at embarrassing us, we were ceremoniously renamed “Yankee 1”. Since no other “Yankees” conduct protective services in southern Iraq, we now own a unique moniker which has gotten more than its share of positive comments during our previous travels to Nasiriyah and Baghdad.
Posted by VMICraig at 5/01/2004 12:41:00 PM 2 comments: