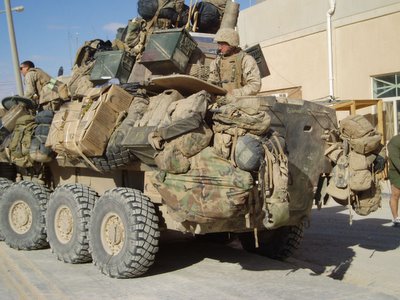 A light armored vehicle (LAV) heading out on patrol from 1st LAR.
Much like a gypsy wagon of yesteryear, everything they own is
strapped to the sides of the vehicle. One crewman jokingly told me it
was extra protection against shrapnel, that "any bit helps." 11/22/05

I left Al Qa'im yesterday flying "space available" status. About 75 Marines and soldiers were retrograding out of Al Qa'im at the same time, while the CH-46's and 53's kept rolling in to take them away. Loading up and taking off in clouds of dust, everything and everyone quickly resembled sugar cookies, only covered in sand instead of sugar. Fresh off the lines from Operation STEEL CURTAIN, these guys are headed back to various bases and camps spread throughout Iraq. Many are going home minus close friends and fireteam members.

Wearing full battle gear – helmet, flak and SAPI plates, sidearm, M-16A2, full pack, loaded pistol and rifle mags – man, it’s something I’ve not done for years at any length and had forgotten just how difficult it can be on the body. Hell, as a boot 2nd Lt., it was difficult. Yet as a wiser, but much older LtCol, it seems worse than I remember. I don't recall the gear being that unwieldy when I was younger. I envy the youth and energy of the young Marines around me. Mentally, I feel I’m still at my peak, but the discomfort of regularly wearing it makes me feel old and out of shape.

I awoke this morning completely unaware that today is Thanksgiving. Heading into the Camp Fallujah DFAC (dining facility), I was oblivious to the decorations posted in the chowhall. It wasn’t until I saw the serving line manned by various unit Chaplains serving turkey and stuffing that I realized today was a holiday at home. Even in Iraq, the folks are feeling the holiday spirit.

Leaving chow, I overheard some young Lance Corporals talking about their meal. I love Marines – they are the funniest people on earth. And the most vulgar. One looks over to the other and says of his meal…”man, that sh__ was fu____n’ good as f___.” Whether a noun, adjective or adverb, Marines turn cusswords into an art form. I’ve said some things close to that and only have my VMI and Marine Corps background to blame for my crude lingual habits.

Gunny Fay, the combat artist who deployed with me, also returned from Al Qaim this morning. He was out with Fox Company, 2/1 during the same time I was with the Regiment, and was proud to show me his shrapnel wound received on the 15th during the fight in Ubaydi. For those of you who haven't read my entire blog, Gunny Mike Fay is the Marine Corp's only resident combat artist, and regularly embeds with units on the front line, taking up a rifle during the fight, and occasionally snapping some photos or sketching some artwork during lulls in the action. He brought home some outstanding sketches from his travels, posted below. He's a heck of an artist, and I'm proud to announce he'll be promoted to Warrant Officer on December 1st.
Posted by VMICraig at 11/24/2005 11:45:00 AM

Happy Thanksgiving, we will be thinking of you more today than usual. Dennis noted your absence again today and we told him you would be home soon. Take care.

Keep up the great work and stay safe. I love your pictures and your blog. Keep enlightening all of us.
Take care,
Sandy

We are sorry that you missed Daphne's turkey this year. However, I am sure she will make some pies for you when you arrive home. Maybe she will even add a little more alcohol to them than normal...

Congratulations on your promotion(s)! Your pictures look fantastic. Heard you earned yourself a souvenir to take home. Be Safe!