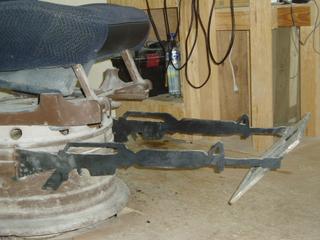 I turned in my Field Historian “concept of operations” to the II MEF (Fwd) Chief of Staff, Col. John Ledoux. Unlike previous OIF deployments, the current MEF staff is somewhat concerned about spare LtCols wandering around their AOR’s. Rightfully so. Fortunately, Major Major General Stephen T. Johnson, the MEF CG, indicated he was “historian friendly” during our first meeting in the hallways of the MEF HQ. Perhaps now I can get out into the field without ticking off someone important.

Subsequent to turning over my CONOPS to Col. Ledoux (a Sarasota, FL native), I sent an e-mail to Brigadier General Augustus (Leon) Collins, CG for the 155 Brigade Combat Team, affectionately known as the "Mississippi Rifles." I requested permission to visit the Commanding General’s AOR northeast of Karbala within the next week, as the 155 BCT has supported II MEF for months. I was surprised to receive a direct response from General Collins, who stated he’d be happy to oblige, just 30 minutes after sending him my request.

Older than the state of Mississippi and the seventh oldest infantry unit in the United States, the 155th Infantry, formerly the First Mississippi Regiment, was handed its first commission on 1 June 1798 by Winthrop Sargent, territorial governor of Mississippi. It was during the Mexican War, that the 155th Infantry, then the First Mississippi Regiment, was commanded by the great Jefferson Davis, who resigned his seat in Congress to assume command. At Buena Vista, 22 February 1847, with the Mexicans out-numbering the Americans five to one, General Zachary Taylor called upon Jefferson Davis and the First Mississippi Regiment. Moving quickly into the assault, Davis gave but one order: “STAND FAST, MISSISSIPIANS.” History was made that day and the order became the official motto for the unit, later to be emblazoned on the unit crest. Through the Civil War, in engagements in Kentucky and Tennessee; in the Spanish-American War; in World War I, at Beauregard and in France, and in World War II, in the Southwest Pacific, the men from “Mississippi’s Pride” were always among the finest. Though not Marines, they’ve become part of the II MEF (Fwd) team, as fine as any Marine Corps unit in the AO.

On a personal note, I hope to speak with the officers about one of their fallen comrades, Captain Lowell T. Miller, VMI class of 1993.

JACKSON (AP) - A Mississippi National Guard unit in Iraq has captured the insurgent who killed one of its soldiers during a firefight last month, the unit's commander said. Capt. Lowell T. Miller II, 35, of Flint, Mich., was serving with the Mississippi National Guard's 155th Infantry Battalion, 155th Brigade Combat Team when he was killed by small arms fire during a raid in Iskandariyah on Aug. 31
.
"Capt. Miller volunteered to transfer from the Michigan National Guard to the 155th Infantry Battalion so he could deploy to Iraq with this unit," said the battalion's commanding officer, Lt. Col. John M. Rhodes, in an e-mail from Iraq." Just by his request, I knew Tom was a patriot and a warrior," Rhodes said. "Many people seek to avoid combat deployments, but Tom was willing to risk everything in order to deploy with a group of soldiers who he did not even know."

During a raid on a suspected insurgent stronghold, Miller was shot and later died despite desperate attempts to save his life, Rhodes said.Information obtained from five suspects who were detained just after the attack and tips provided by local Iraqis helped the unit to identify the man responsible for the fatal shooting, Rhodes said Rhodes said the unit raided the suspect's home and captured him last week and he will soon appear before an Iraqi judge.

Miller's primary job in Iraq was to train Iraqi soldiers, Rhodes said. "Tom was extremely dedicated and always led by example. He was a hero to his soldiers," Rhodes said. "Tom will continue to live through us, and we will carry on his legacy." Miller came from a military family. His father served 22 years in the Naval Reserves and his brother and sister have both served in Iraq.

"Dad, I serve so others don't have to," he once wrote to his father, Lowell Miller. "You taught me to be a leader, to stand up and sacrifice so others would not have to. You were in the military and served so your kids wouldn't, yet we do. You taught us well."

Miller graduated in 1993 from Virginia Military Institute and later joined the Michigan Army National Guard. He was part of the 155th Brigade Combat Team in Iraq, which is made up of nearly 4,000 Mississippi Guard soldiers and others from throughout the county. The unit is attached to the II Marine Expeditionary Force and operates in the Karbala, Najaf and Babil provinces of Iraq.

On a lighter note, I met an interesting Marine the other day while passing by the barbershop inside the II MEF Battle Square. Gunnery Sgt. James L. Johnson was the II MEF (Fwd) Security manager for OIF 4-6, having previously deployed to OIF-1 and OIF 2-2. He finally went home yesterday and I was sad to see him go, as we had just become acquainted and I rather enjoyed his company. Besides his official function as II MEF (Fwd) Security Manager, Gunny had the distinction of being the MEF’s unofficial barber. Gunny could be found in his “barbershop” after 1800 hours nightly, cutting hair for free, though accepting donations if offered.

As we chatted, I noticed the Gunny’s unique barber chair and upon closer examination, shook my head at the ingenuity of our young sailors and Marines deployed in theater. The barber chair is actually a Mitsubishi van seat, welded to a USMC 7-ton truck rim. Underneath the plywood flooring, the rim has been affixed to a .50 caliber ring mount pulled off of a destroyed vehicle, which allows the barber chair to traverse 360 degrees. A young “sea-bee” from Naval Mobile Construction Battalion 1 used his welding skills to craft a footrest, made of scrap metal from a damaged HMMWV. The chair has been used by Privates and Generals, to include Genrals Sattler and the current Deputy CG, Brigadier General Patton. Now that's a piece of history that belongs in a museum one day!
Posted by VMICraig at 10/03/2005 10:38:00 AM

Thanks for the update, Craig. Your posts are always interesting.

I was looking for a map of Iraq that shows the places you mentioned in your posts. This one is missing a lot of cities but it is the best one I can find.

Hey leafeater, get your chin in nut! Sorry, couldn't resist! Love your blog bubba. And I must say Craig, you make a fine historian. I'm passing on your blog spot to all the VMI guys I know. Keep up the good work, and stay safe. A bunch of people back in the States want to see you come home safe. So keep your head down lest you become part of the history about which you write!

I'll try to email you soon.
Yours,

I just came across your sit Craig. I am Captain Lowell T Miller II's father. I appreciate you publishing the info on him. I know this comment is well after the fact. Just wanted you to know.

I served in Bco at camp Iskandaria when all of this occurred. I had only met Cpt Miller at the qualification range in Kuwait and then again in our Bn TOC after patrols to give our intel dumps. Oddly, the last four months of my tour, I replaced an NCO from the Iraqi compound after this unfortunate event went down. Most of my buddies were there that night on the roof top. The 155's tactics and duty in this AO were commendable. We didnt just sit back and guard the front gate. We actively patrolled around the clock and aggressively went after the insurgents. This is lost to the general public.

This AO was extremely challenging. Stradling the Sunni and Shia divide smack in the "Iron Triangle". It didnt draw the notariety of other places but it was Hot to say the least.

The only reporters that I remember were invited on behest of my PL Lt Anthony from the Tupelo Times and they were IED on their little venture out.

Well, I think of these things daily, but dont feel that his effort was in vain.