Visits around the AOR 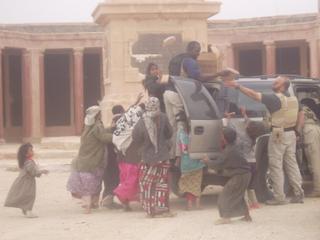 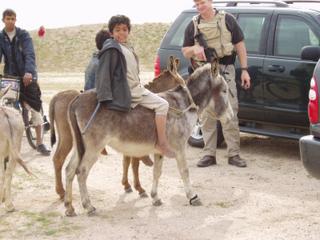 I've just returned from a 2 day trip throughout the southern Coalition Provisional Authority region (CPA South). As I've probably mentioned earlier, CPA South is one of 6 geographical regions created at the end of Operation Iraqi Freedom. The overall Coalition is currently administered by Mr. Paul Bremer, under the direction of President Bush and Secretary Rumsfeld. Of the six regions within the coalition, CPA South controls all military forces operating in Southern Iraq, which includes a dozen different countries, such as England, Romania, Japan, Finland, Czechoslovakia, Holland, and Korea, to name a few. Interestingly, there are very few American forces operating in the region. With the exception of my team, the CPA compound in Basra is almost entirely staffed by British and Fijian soldiers. We also have quite a few local Iraqi's employed as day laborers which always creates a little bit of tension when we consider the security of the compound.

CPA South is controlled by a career British Diplomat, Mr. Patrick Nixon, who was a direct appointee of Bremer, Rumsfeld and Pres. Bush. The other 5 administrators are also career diplomats, though most are American. Each administrator, or Ambassador, will eventually turn over his duties to newly elected Iraqi Governors, if and when the Iraqi elections finally take place.

It is the duty of my team to provide protective support to Ambassador Nixon throughout his tenure as the CPA South Administrator. While in the CPA compound, we rarely interact with the Ambassador unless there is some apparent threat, such as a mortar attack or some other reason to hustle him into a bunker for safety. However, the Ambassador will not make any trips out of the CPA without having my team in tow. Perhaps he enjoys the extra attention, particularly when he's seen walking through town with his security entourage. However, I can only imagine the constant presence of his ever-suspicious security team must become tiresome, particularly in some of the crowded areas we walk through during his face to face meetings with Iraqi governing councils or local religious leaders.

Our trip throughout CPA South took us back to the familiar towns of Al Nasiriyah and As Samawa. What made our trip different was the weather. A cold front had swept in from the North, bringing with it those famed sand storms you hear of and see in movie classics starring Lawrence Olivier. Although our morning started with a dusty haze in the air, by noon, our visibility had lowered to approximately 100 feet and we still had several hours before reaching our destination. The sand and dust had become so thick that you could stare directly at the sun, similar to the way you look might gaze at the moon at night.

After reaching the CPA at As Samawa, we were informed that the Ambassador would be having tea with the local Iraqi Governor of As Samawa at his "secure" compound. Having been informed of a recent rocket and small arms attack against U.S. General Abizaid, commander of CENTCOM, that had occurred 2 days earlier in another "secure" compound, we were a little hesitant to trust the security provided by our Iraqi hosts. As we reached our destination, my entire team dismounted our vehicles and hastily posted a 180 degree defense around the front of the palace. Then, out of nowhere, a dumpy white guy approaches on foot and asks in English if I could answer some questions about the newly arrived Japanese forces in the city. It turns out he's a reporter for the LA Times who was sent to Iraq to cover the 1st deployment of Japanese forces since W.W.II. Amazing who you meet in such far-away places.

On our trip back to Basra, the weather started cooperating and cleared a bit for the drive. Driving the armored SUV's is a unique experience at 100 mph. Each vehicle is built with special armor to withstand small arms attacks and varying levels of explosions. The package creates a very heavy vehicle, which rides very smoothly at high speed. Believe it or not, the highways throughout the region closely resemble interstate highways in America, complete with rest stops lined with umbrella shaded picnic tables, though the tables haven't fared too well from the war and the weather. However, there is no such thing as a gas station or 7-11 to pull off and visit. You can literally drive 100 miles and see nothing but highway, rusted tanks, sheep and desert.

We headed northeast for a small town named Suq ash al Huq, which I dare say is even dirtier and nastier than any other locations I've previously reported. We were told the city was prone to criminal violence and that we could expect to have rocks thrown at our vehicles or other acts of protest against our visit. That's a great way to start a ride. Although we asked ourselves why such a visit would occur, we already knew that the Ambassador was scheduled to meet the local Iraqi governing council to discuss the early stages of the CPA's involvement in the financing and rebuilding of the town, which had also suffered battle damage during the coalition advance.

While waiting for the Ambassador to finish his meeting, I was surrounded by a group of young street children, most dressed in dirty, unkempt clothing, some with no shoes. Despite their appearance, all of them smiled and appeared excited to interact with someone so different from anyone they had ever met. Having only experienced unsmiling British and Dutch military patrols passing by in their military vehicles, the sight of eight oddly dressed "americani's" carrying fancy guns and wearing special gear and clothing was something the children considered fantastic. Three well dressed children approached us, schoo-ing the other children away, and spoke directly to one of my teammates in perfect, yet accented english. The children were Aussies! The sons of an Iraqi father and Australian mother, they had come to Iraq with their parents 6 months earlier. The children warned us that all of the robed men in town carry concealed firearms underneath their gowns and that we should be careful. However, the children also remarked that the entire town hated Saddam Hussein for having destroyed the town following Desert Storm and that most townsfolk liked Americans. Sometimes you never know who you'll befriend in far-away places.

Our return to CPA Basra was once again uneventful. Although we passed a few individuals armed with AK-47's, none were foolish enough to raise them or point them our way. Most armed men are associated with the newly formed Iraqi Police, though many individuals still carry their weapons outside of their homes despite the ban by the Coalition. Fortunately, few have ever received marksmanship training and even fewer can actually hit something they aim at. Most of the former Regime soldiers were provided weapons without training and utilized the "spray and pray" method of firing their weapons. Sometimes we worry that we are more likely to get hit by a stray bullet fired during a wedding procession than we are by a possible attack from insurgents.
Posted by VMICraig at 3/30/2004 11:04:00 AM